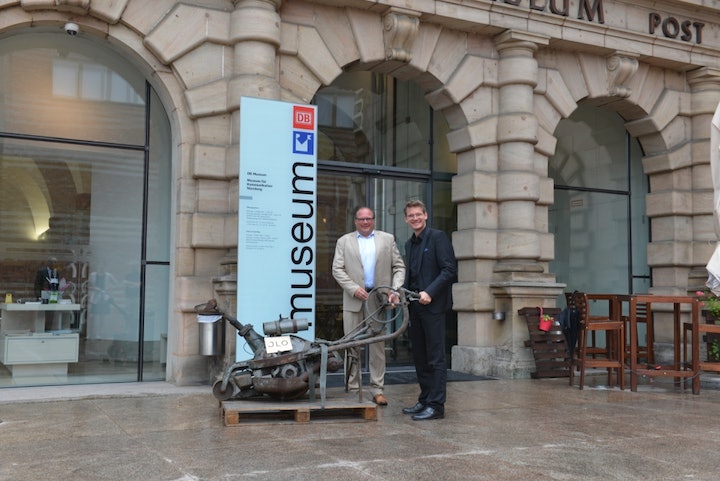 Andreas Frank, Managing Director of STAUB & CO. – SILBERMANN, and Dr. Oliver Götze, Director of the DB Museum, during the transfer of the ILO single-wheel rail-car pushing device in front of the museum entrance

The single-wheel rail-car pushing device was developed by the company ILO-Motorenwerke and brought onto the market in 1931. Companies with modest volumes used the device to shunt individual freight cars without the need for locomotives. In the history of railway technology, the single-wheel rail-car pushing device is an important example of the technological development that has taken place in the field of private siding tracks.

This particular device from around 1930 was in use at the headquarters of STAUB & CO. – SILBERMANN on Ostendstrasse in Nuremberg until the 1970s. It is one of the few surviving single-wheel rail-car pushing devices in existence and the first one acquired by the DB Museum in Nuremberg. The donation was accompanied by historical photographs of the rail-car pushing device in use at STAUB & CO. – SILBERMANN, as well as an original catalog of spare parts.

The new exhibit will now be cataloged and inspected at the rail yard. The date at which the DB Museum will put it on display for the general public has not yet been determined.

Information about the company:
Today, STAUB & CO. – SILBERMANN is one of the leading chemical sales companies in Germany. Approximately 200 people are employed at their locations in Nuremberg, Gablingen and Munich. They supply their customers with more than 26,000 different chemicals. Their product range comprises industrial chemicals and a large and growing selection of specialized chemicals. In addition to chemical distribution, the company also offers its customers a diverse range of services, chief among them being toll manufacturing. The Gablingen site produces all types of chemical preparations – aqueous, solvent-containing or powdered – to order for its customers. Additionally, STAUB & CO. – SILBERMANN provides support for customers in the areas of analysis, documentation and disposal. As part of the STOCKMEIER Group, the company has access to the resources of the group’s 24 German locations and a total of more than 40 locations around the world.